“Since Vino de Milo’s started up with the help of ACEnet 13 years ago, it has actively contributed to all sorts of fundraisers in the community,” said company founder Jonathan Milo Leal.

ACEnet allowed Leal the opportunity to take his products to the next level, finding a place a cook on a larger scale and try new recipes. Although the company experienced a slump in production a few years ago, it has since undergone a redesign and is back on the up the up.

To give thanks to a community that’s supported the company through its ups and downs, Vino de Milo has donated gift baskets, product, and time “to just about every fundraiser and non-profit in Athens” since its inception, Leal said.

Gifts vary by group, but have been a mix of products offered by Vino de Milo, he said. 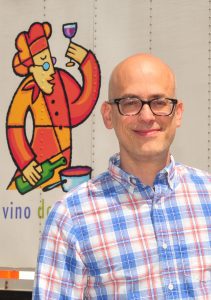 “The local community has been a huge supporter since we started 13 years ago, and we are happy to be able to give back in any way we can,” Leal said.

Vino de Milo products can be found locally at Kroger, Nelsonville Emporium, Ohio University’s Baker Center, The Village Bakery, and the Farmacy, but also at major retailers such as T.J. Maxx and Whole Foods Market. The company’s Facebook fan page has additionally announced when the products have launched at niche grocery stores all across the country, and also at stores as far away as San Juan, Puerto Rico. Vino de Milo has gone global, too, exporting to Canada, Colombia, Panama, Japan, Korea, Germany, and Kuwait.

“We get so much support from the Athens community that it only makes sense to give back as much as we can,” he said.