On East State Street in Athens, there resides a small business that epitomizes an emphasis on local products, renewable energy and community awareness. It’s a place where owners Christine Hughes and Bob O’Neil strive to make customers feel at home in the heart of the city.

The Village Bakery & Cafe is located at 268 E. State St., tucked away under a broad overhang that helps cool the business. The front porch is just the first example of the business’ focus on renewable energy.

In the last year, the Village Bakery has installed a geothermal unit to help with energy costs.

“Bit by bit, we’re cutting back our fossil fuel dependence and our goal is to be 100 percent run on renewable energy,” said Hughes, adding that the goal is to do so by 2017.

Currently, Hughes estimates that the business is about halfway there.

In addition to the geothermal unit, the Village Bakery boasts solar panels on its roof and has replaced appliances with that of Energy Star models which has helped save about 75 percent on energy use.

With this focus, it’s no surprise that the Village Bakery has selected it 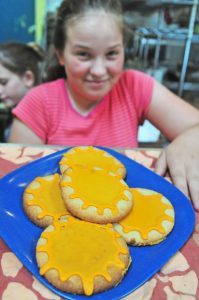 Geoff Greenfield, co-owner of Third Sun Solar, is an unabashed fan of Village Bakery, especially its Georgian Pastry. Greenfield said it was an honor to sponsor the Product of the Month and to work with Village Bakery.

“They are an institution in Athens and have one of the (solar) installations we are most proud of,” said Greenfield. “They show that solar panels can be beautiful, are functional and economical.”

The Solar Cookie is a sugar cookie made will all local golden spelt flour from Starline Organics. It features a fresh orange glaze on top in the shape of a sun. It will be available at least through the end of August at the Village Bakery.

The bakery prides itself on keeping as many local dollars in Athens and the surrounding area as possible. Village Bakery buys local whenever possible and features other local businesses such as Shagbark Seed & Mill and Shade Winery. Additionally, the decor of the bakery is saturated in local design, some of which was painted by Hughes herself.

“We’re proud of all the local artisans we can bring into this space,” said Hughes. “We see it as a community space, a gathering place. I think of it more as belonging to the community rather than it being our place.” 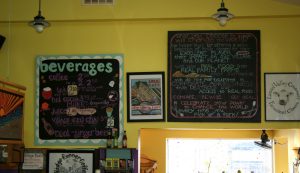 Village Bakery opened in 2002 under Hughes and O’Neil joined later. Prior to the opening, Hughes was involved in a Community Supported Agriculture business making bread and she was employed at Casa Nueva — a worker-owned co-op. It is how she became involved with ACEnet.

“I can’t see myself where I am today without the existence of ACEnet,” said Hughes. “It was a lucky thing for me that I landed in Athens. They’ve been a part of pretty much every step of my growth.”

Under the CSA, Hughes used ACEnet’s kitchen to bake the bread. After Casa Nueva, Hughes was able to run a small cafe at ACEnet. The business incubator went on to help with packaging, labeling, presentation, communication and marketing. Opening the Village Bakery was a sort of graduation for Hughes from the incubator.

The response from the community is overwhelmingly positive and for Hughes, it’s been a great ride, one in which she said she “lost the brake” somewhere along the way. Between the relationships forged and the business model employed that focuses on “social, economic and environmental justice,” Hughes seems very happy with her business adventure.

“I love it. It takes a lot of energy but I hope my energy is renewable too,” Hughes said.