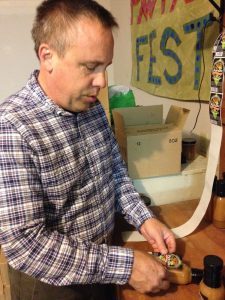 “When life hands you lemons, you make lemonade. Believe it or not, Southeastern Ohio, we’re blessed with some of the best wild pawpaws in the world.”

Chris Chmiel and his wife, Michelle, wanted to find a way to make a living in Athens County that they both could feel good about. Chmiel is conscientious of sustainable agriculture and renewable resources and wanted to integrate that goal into a business.

Integration Acres was born in 1996 and has become the largest processor of pawpaws in the world, according to Chmiel. Last year, more than seven tons of pawpaws were processed through the company.

During his collegiate years at Ohio University, Chmiel did some traveling and discovered other cultures making a plethora of products using cousins of the pawpaw. Taking those ideas along with the abundance of pawpaws in Southeast Ohio, Chmiel started Integration Acres.

“We saw a market here. Pawpaws were basically all rotting on the ground, not being used or eaten. We wanted to create economic value with the pawpaws that also has environmental and social benefits,” said Chmiel. “This whole project grew out of those ideas.” 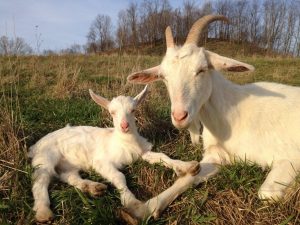 “The animals don’t eat the trees. They eat everything else. We don’t have to spend a lot of energy and time with herbicides,” Chmiel said. “We’re committed to doing this without chemicals. We don’t have to mow because the goats eat the brush and they fertilize the soil.”

On the heels of Integration Acres also came the Ohio Pawpaw Festival in 1999. Chmiel launched the festival with the idea of educating people about pawpaws and the event has since grown to the point where thousands of dollars are brought into the county each year from outside sources.

Chmiel began this adventure though the help of the Appalachian Center for Economic Networks and November’s featured Product of the Month collaboration between ACEnet and The Athens Messenger is the Pawpaw Maple Vinaigrette. The feature is sponsored by The Athens Real Estate Company.

Casa Nueva, one of Integration Acres’ customers came up with the recipe for the Pawpaw Maple Vinaigrette and Chmiel asked if he could use it and bottle the product. They agreed. The vinaigrette has maple syrup, apple cider and, of course, pawpaws. Whenever possible, Integration Acres’ ingredients are all sourced locally.

The Pawpaw Maple Vinaigrette can be found at Kroger, Village Bakery, Farmacy, the Athens Farmers Market and online at www.integrationacres.com.

“I was lucky that ACEnet was here. I couldn’t have done it without ACEnet,” said Chmiel. “From the community kitchen, to the infrastructure needed … We were doing a new, innovative thing and we wouldn’t have been able to do this. They helped a lot with me figuring out the food processing, food safety, putting pawpaws in the jars.”

Eventually, Integration Acres graduated from ACEnet with most of the operations happening at the farm located 9794 Chase Road in Albany. Bottling still takes place at ACEnet.

Russ Chamberlain, of The Athens Real Estate Company, is a former director of the the Food Ventures Center at ACEnet. He met Chmiel when Integration Acres was first forming and helped the process wherever he could. Chamberlain said he was impressed with Chmiel from the beginning and said that if anyone “walks the walk” about environmentalism, it’s Chmiel.

“Chris was a standout early on,” Chamberlain said. “He’s committed to sustainable practices.”

jams and other products made by Integration Acres.

Although Chmiel may not have expected the quick rise of Integration Acres, he’s not exactly surprised.

“I did have a big vision. I wasn’t exactly sure where it was going to head but I saw a lot of potential. We have a farm that we’ve been able to do a lot of stuff. It’s been exciting,” he said.