More Than “Just” Cuban Food, Sol is an Experience Worth Having Again and Again

What kind of business would an elementary school teacher and a mechanical engineer open together? Naturally, it’d be a Cuban restaurant … right?

Natural or not, some of the best food options in town can be found at Sol, an Athens restaurant that boasts not only fine Cuban culinary options but also specializes in more traditional bar and restaurant foods to create an incredible dining atmosphere.

Sol’s origins begin with the story of Todd and Tuti Wilson. The two met in middle school, dated throughout high school and then college at Ohio University before being married when they graduated in 1994. For the next decade, the couple lived in Miami — Tuti Wilson’s hometown — before traveling back to Athens in 2004 to build a life with their children. 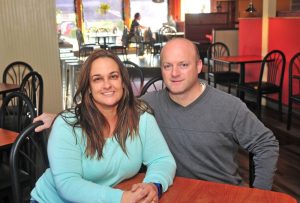 Todd Wilson graduated with a degree in mechanical engineering, Tuti Wilson with a degree in elementary education. For a time, he worked full time while she took the task of being a stay-at-home mom. As the children got older, Tuti Wilson caught an idea after watching a Food Network show and wanted to open her own food cart.

The duo had no formal restaurant experience and no culinary training, but loved to cook and entertain.

“We always thought a Cuban food restaurant would do well in Athens,” said Todd Wilson. “Everyone we knew that had tried Cuban food really liked it.”

The expertise behind the recipes came from Tuti’s godmother, Lilia. Now in her mid 90s, Todd Wilson said she continues to cook and certain recipes of hers have been passed down to Tuti’s mother and to Tuti. He said that there are some dishes that he’s learned to make from her that no one else knows how to do.

In 2010, Chica Chica Chop Chop opened for business on Richland Avenue in Athens before moving up the road to Court Street. Quickly, the Wilsons learned how different it was to cook for large amounts of people rather than a dozen or fewer. Much of what was learned had to be done through trial and error.

About a year later, the food buggy was ready to move into a brick and mortar building to become a full-fledged restaurant. The spot located at 33 N. Court St. was originally shot down by Todd Wilson because of its smaller size and lack of storefront. Nonetheless, Sol opened its doors for business in 2012 at that location.

This year, the lease for a location at 700 E. State St. became available for what used to be The Maplewood. The Wilsons jumped on the opportunity and opened a second location of Sol in October after months of repairs to the building.

By conventional method or not, the Wilsons have built a 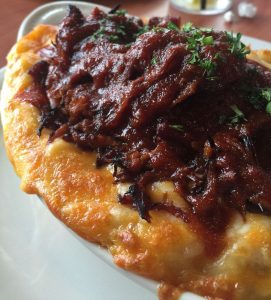 sustainable restaurant from just an idea.

“I always wanted to have a restaurant. I thought it’d be a neat thing,” said Todd Wilson. “We like food and we like to share the culture and the experience of Cuban cuisine and food in general. I think our goal was to have the cart and eventually transition to a restaurant. I don’t think we ever thought we’d have two restaurants in Athens.”

The new location on East State Street is inviting, more casual and caters to a family crowd as well. If the neighborhood was looking for a bright and shiny new place to eat, it has it.

Word of the cuisine is quickly spreading throughout the area. Among the incredible lineup of menu items, the Mac & Cheese with BBQ Pork has been selected as the Product of The Month for December in a collaboration between the Appalachian Center for Economic Networks (ACEnet) and The Messenger. The Product of The Month is sponsored by the Athens County Convention and Visitors Bureau. Executive Director Paige Alost congratulated Sol on opening the new restaurant.

“The Athens County Convention and Visitors Bureau salutes Sol Restaurant’s fantastic menu, great locally sourced items and family atmosphere. And, we’re especially excited to have them across the street from our offices and the Athens Community Center,” she said.

The macaroni and cheese is made with local Snowville Creamery milk and the barbecue pork features 14-hour mesquite pulled pork guava rum barbecue sauce made from scratch. Todd Wilson said it’s one of the restaurant’s best sellers.

ACEnet was instrumental in Sol’s early growth, as the business used ACEnet’s kitchen incubator to prepare food and to help with catering jobs.

“They (ACEnet) are definitely a big help in getting people started that don’t have access to a kitchen,” Todd Wilson said.

While the Court Street location runs on more of a weekend-type schedule, the East State Street location is opened seven days a week closing at 10 p.m. everyday except for Sunday (9 p.m.). Sol is also still hiring for the new location.

“Things are going pretty well,” Todd Wilson said. “We’ll continue to make adjustments as necessary. People are still figuring out we’re here and trying us out.”