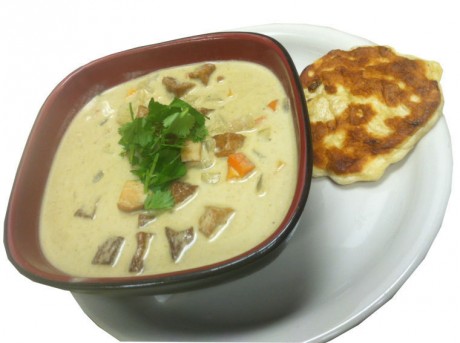 As night rolls in, things at Fluff Bakery and Catering are starting to pick up once again, with the smell of cardamom, green curry and lemongrass starting to waft through the air.

Jason Kopelwitz takes over the kitchen, transforming the restaurant from his wife Jessica’s bakery into an amalgam of sweets and savory dinners with his own blend of Thai flavors brought over from the former freestanding Rickshaw Thai. 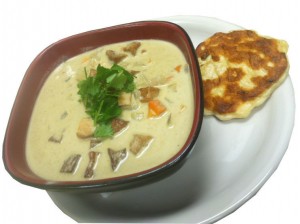 The meals being made include ACEnet and The Messenger’s Product of the Month for January, a spicy green curry with hoisin-marinated pork and root vegetables, served over jasmine rice. Buttery naan, a toasted flatbread served warm arrives on the side.

The product of the month is sponsored by O’Nail-Hartman Insurance in The Plains.

“We admire what they do and we like how active they are in the community,” said Brent Hartman, of Fluff Bakery and Catering.

Rickshaw Thai was once a reservation-only oasis, hidden away in Eclipse Company Town in The Plains, but has now been joined with the Court Street life of Fluff. “The Fluff”, as the Kopelwitz couple now calls it, is a blend of the two owners’ personalities and businesses, and it was a long time in the making.

The journey to The Fluff started in the Tremont neighborhood of Cleveland, where Jess learned to bake and work in the restaurant business. The owner of the businesses with which she worked were amid the farm-to-table movement, she said. The movement was all about localizing production of food, bringing in homegrown or closely grown products to be used in the food served at the restaurant.

“That’s why 30 Mile Meal here in Athens was something we were very supportive of,” Jessica Kopelwitz said.

The 30 Mile Meal Project is a collaboration between the Athens County Convention and Visitors Bureau, the Appalachian Center for Economic Networks (ACEnet) and more than 140 local food partners. The project is an effort to help residents and visitors to Athens find places to eat local food within the region.

The Kopelwitzes have been leaders in the project, according to Angie Hawk Maiden, the president and CEO of ACEnet.

“ACEnet and the Athens Convention and Visitor’s Bureau are fortunate to have their leadership in the 30 Mile Meal Project, which focuses on connecting farmers, producers, restaurants and other local food partners and increasing the awareness of the impact of the sector,” Maiden said.

Fluff comes from the small beginnings that many vendors involved in ACEnet face, using 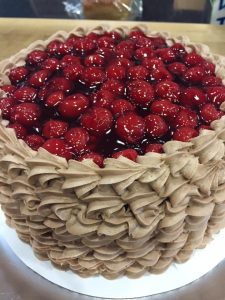 equipment from former kitchens and making products wherever the space was available.

Jessica Kopelwitz said her bakery started in her sister’s kitchen, while Jason was working with his background in biochemistry.

Although they met in New Philadelphia in high school, Jess and Jason began their relationship as seniors at Ohio University and when they married, they went to Cleveland to begin their lives. They were drawn back to Athens, however, and Jason began brewing at Jackie O’s and Jess continued baking while she decided how to create her business.

One day in 2010, they walked by what was then a former Cold Stone Creamery, and took a good look at the space.

“I walked in and I thought, ‘we could do something here,'” Jessica said.

She had a business plan created within a day-and-a-half, and their house in New Philadelphia was sold to help with funding for the business. Their savings account was also put toward the new vision.

Their dream of making bagels, donuts and biscuits, among other bakery staples, came to life.

“I wanted to start an old-school bakery,” Jessica said. “I wanted something that, when people walked in, they recognized it as something from their childhood, with products that reminded them of childhood, too.”

She also wanted to bring Athens something different than the typical Court Street scene.

“There’s enough bars in Athens, I just chose to be something else,” Jessica said.

“We’re trying to bring all the things we love together,” Jessica said.

After settling in on a routine and increasing their employee base (which was just Jessica and Jason at first), more visions came to mind.

“We knew to be sustainable we had to be more than a bakery,” Jessica said.

That’s when Jason began his exploration of the food of Thailand. He did his research from “Thai grandmothers” on the Internet, Jessica said, and studied up before picking up a skillet. Rickshaw Thai was born.

To the forefront came red-curry-seasoned tilapia in tacos, bahn mi in sandwich and salad form, Thai-style burgers, curries of various spice levels and a soup filled with coconut, lemongrass and jasmine rice.

All this without a single trip to Thailand. Or, Jessica said, much restaurant experience.

“The first time Jason worked on a (food) line was at Rickshaw,” according to Jessica.

Now that the Thai food is flowing out of the kitchen, Jessica and Jason Kopelwitz are seeking even more opportunities. Their newest endeavor: wings.

In December, what was once Nine Tables, On Shafer Street in Athens, became West Side Wingery, a new, neighborhood carryout from the couple that brought you The Fluff.

The owners of Nine Tables now sit in Eclipse where Rickshaw had its beginnings, and the wingery has already scored its first day of success, on Dec. 29.

“We completely sold out of food,” Jessica said. “It was amazing.”

Rickshaw’s chicken wings and tacos are currently on the menu, but Jessica Kopelwitz said the hope is to expand the menu and the hours.