He may just be a guy from Southside Chicago who makes barbecue but Sean Kiser calls Athens home and, in just a few years, he’s made quite a splash in the restaurant business.

Kiser is the proprietor of Kiser’s Barbeque, located on East State Street in Athens and on Court Street in Athens. The restaurants have quickly become known for their food and for giving back to the community.

Kiser’s produces four different bottled, homemade sauces. Sweet Red is Kiser’s version of a mild sauce and is the restaurant’s most popular. Carolina Vinegar is, naturally, a vinegar-based sauce. Sweet and Spicy is a medium blend and Sean Kiser’s favorite. Last, but not least is Habby, a Habanero Pepper blend with locally sourced habanero peppers as ingredients. 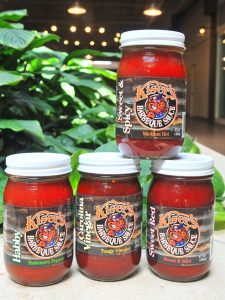 This is the third summer for the bottling of the sauces as Kiser is setting the groundwork for possibly expanding production in the future.

Currently, the sauces can be purchased at both restaurants as well as Seaman’s Cardinal Supermarket in Athens and online at www.shopathensohio.com.

The bottling of the sauces takes place at ACEnet. Before opening his first restaurant, Kiser approached Larry Fisher at ACEnet and talked about the bottling process. When customers began asking for the sauces by the bottle at the restaurants, Kiser and Fisher spoke again and bottles started flying off the shelves.

Kiser is originally from Gallipolis but moved to Chicago and grew up in Illinois before moving to Athens in 2000. When he was deciding on a college, he first looked at Ohio State University, having grown up a Buckeye fan. When he arrived on campus, however, he noticed more concrete than anything else and it reminded him of Chicago.

Kiser’s father had obtained his masters degree from Ohio University and suggested to his son to give Athens a try.

“When we first came off that (Route) 682 exit, I saw the football team practicing and the cherry blossom trees were in full bloom … I instantly fell in love with the place,” said Kiser. “At that point, it didn’t matter what OU had to offer, I wanted to live here. This was exactly what I was looking for.”

Kiser graduated in 2005 and his wife was finishing up her degree to become a nurse. With an English degree in tow, Kiser questioned what to do next. Having worked in restaurants — such as managing both the Court Street Diner and Buffalo Wild Wings — Kiser thought to put that experience to use.

“I’ve always enjoyed cooking,” he said. “I’d dabbled in barbecue but never thought of really doing that as a business but I was thinking about it when (a television show) profiled barbecue and I saw it and thought, ‘There ya go.'”

Kiser had found a niche in Athens. He started formulating recipes and when the taste was just right, he went for it and opened Kiser’s Barbeque at The Market on State. 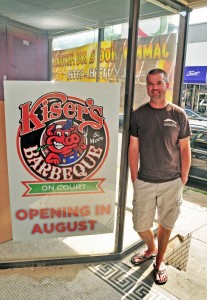 When the doors opened in 2009, Kiser initially questioned his decision but as customers ate and left, their comments were nothing but positive with many saying they had never tasted anything like it. That let Kiser relax just a little.

Five years after that, Kiser opened a second restaurant on Court Street.

Kiser’s Barbeque is part of the 30 Mile Meal and Kiser said he tries to use locally sourced ingredients whenever possible. He said he likes when the money stays local. Additionally, each month, on every Tuesday, 5 percent of the businesses’ proceeds goes to a local nonprofit. Kiser said that typically $300 to $500 is donated each month.

“I enjoy this community and being part of it. It’s a way to give back,” Kiser said of the community efforts. “It was instilled in me to help when I can. I have the ability to do it so why not?”