April 2021 marks the 25th anniversary of the opening of ACEnet’s Food Venture Center in Athens, Ohio. The facility was one of the first rural, kitchen incubators to open in the U.S. Staff and tenants celebrated the grand opening by breaking a loaf of Crumbs Bakery’s Challah Bread. The planning, site selection and building renovation had been a long time in the making. That lead time allowed us to hit the ground running and the Food Ventures Center accommodated 40 food and farm businesses in its first year of operations.

The kitchen incubator model was such a new idea that it took us a bit to raise the project budget. But with grants and loans from the USDA, Ohio Department of Development, the Ohio Department of Agriculture, the support of Hocking Valley Bank and a linked deposit from the Finance Fund, our vision became a reality. We were also frugal stewards of the project budget, securing equipment from The Ridges old kitchen, Nationwide Insurance, and the OSU Food Science & Technology program. An old beer cooler with glass doors on the side became our first walk-in cooler.

Former ACEnet founders and leaders: June Holley, Marti Zinn, Roger Wilkins, Amy Borgstrom, Jeanne Donado, and a willing Board of Directors provided the critical support to chart this new course. Designing the facility was ably facilitated by David Callahan of RVC Architects, and all of our contractors, who never built anything like the Food Ventures Center before.

Fast forward to April 2021, the Food Ventures Center, now coupled with our Food and Farm Enterprise Center, have assisted over 400 food and farm entrepreneurs. And let’s not be modest, those food entrepreneurs have lifted Athens County and Appalachia Ohio to become one of the premier local food economies in the country. Or as we like to say, The Appalachia Ohio Garden of Eatin’. But more about our tenants and graduates to come. 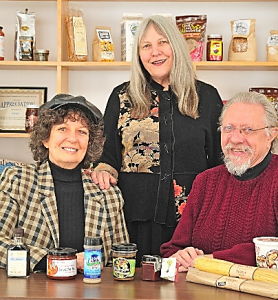 Over the next few months we will continue to journey down memory lane, so stay tuned to our social media posts and upcoming e-newsletters for more photos and reminisces. We would love to hear from you—current and former tenants, clients, funders, partners, inspectors, educators, and ACEnet staff and Board members—share your stories! If you have old photos from the past 25 years please send them to leslies@acenetworks.org. Leslie Schaller, current Director of Programs, original FVC project manager and food economy “long hauler.”  The next installment—the 1999 center expansion.

If you would like to help advance our mission to grow the regional economy by supporting entrepreneurs and strengthening economic sectors, please donate now! 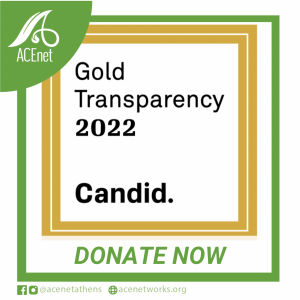