When ACEnet and the Athens County Visitors Bureau launched the 30-Mile Meal campaign five years ago, they found an enthusiastic supporter in Avalanche Pizza and its owner, John Gutekanst. 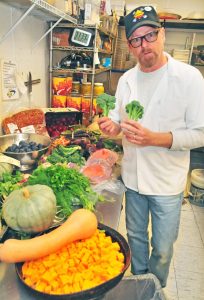 The campaign’s goal of promoting local food producers and growers was a natural fit for Gutekanst, who has a “buy local” business model.

“John and Avalanche, they’ve probably been one of the premiere businesses that does that,” said Leslie Schaller, director of programs for the Appalachian Center for Economic Networks (ACEnet).

“We decided years ago to buy local,” said Gutekanst, who explained that it not only helps the local economy, but also helps his business.

“The product is stellar,” Gutekanst said of the ingredients he buys locally. “The other thing is, you get to meet these people.”

If there there is ever an issue with a locally purchased ingredient, Gutekanst can go to the local person who runs company, rather than deal with an outside corporate supplier.

If you ask Gutekanst who he buys from locally, you’d better be able to write fast because he quickly rattles off a long list (there are about 20). Many of them are current or former tenants or clients of ACEnet.

“He has a history of working with tenants here at ACEnet,” said Schaller, who cited Shagbark Seed & Mill as one example. 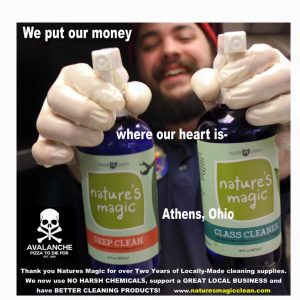 But don’t get the idea that Gutekanst’s community involvement is limited to buying ingredients for his business. If you think that, just ask Susan Urano, executive director of The Athens Foundation.

“He’s just like the Energizer Bunny,” Urano said of Gutekanst’s enthusiasm for helping out.

“He’s very involved in Bounty on the Bricks. That’s how we got to know him,” Urano said of the foundation’s annual dinner on Court Street that is a fundraiser in support of local food pantries.

Besides donating the bread served at the event and donating pizza to feed Bounty’s volunteers, Gutekanst’s involvement is hands-on, according to Urano, who said Gutekanst helps with the food prep. And he’s not the only member of the family to lend a hand, Urano said, explaining that his wife, Debra, and son, Sam, have helped out at the event.

Urano said that Gutekanst and Cindy Hayes organized Bounty Beyond the Bricks, an auction fundraiser for the foundation. 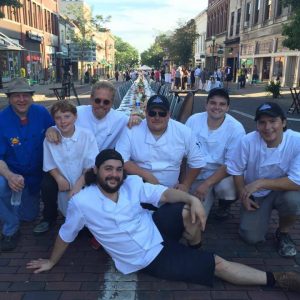 I just have immense respect for him,” Urano said.

Avalanche also hires workers through PersonnelPlus, which matches businesses with employees who have disabilities. Last year, Gutekanst and long-time employee Jason Douglas spoke at a National Disability Employment Month event held by PersonnelPlus, discussing the advantages of hiring people with disabilities. Gutekanst serves on the Business Advisory Council of PersonnelPlus.

“John has been involved for many years employing our people,” said Mark Cullison, PersonnelPlus adult services director, who added that because of Gutekanst’s personality and enthusiasm he makes a strong advocate to hiring disabled people.