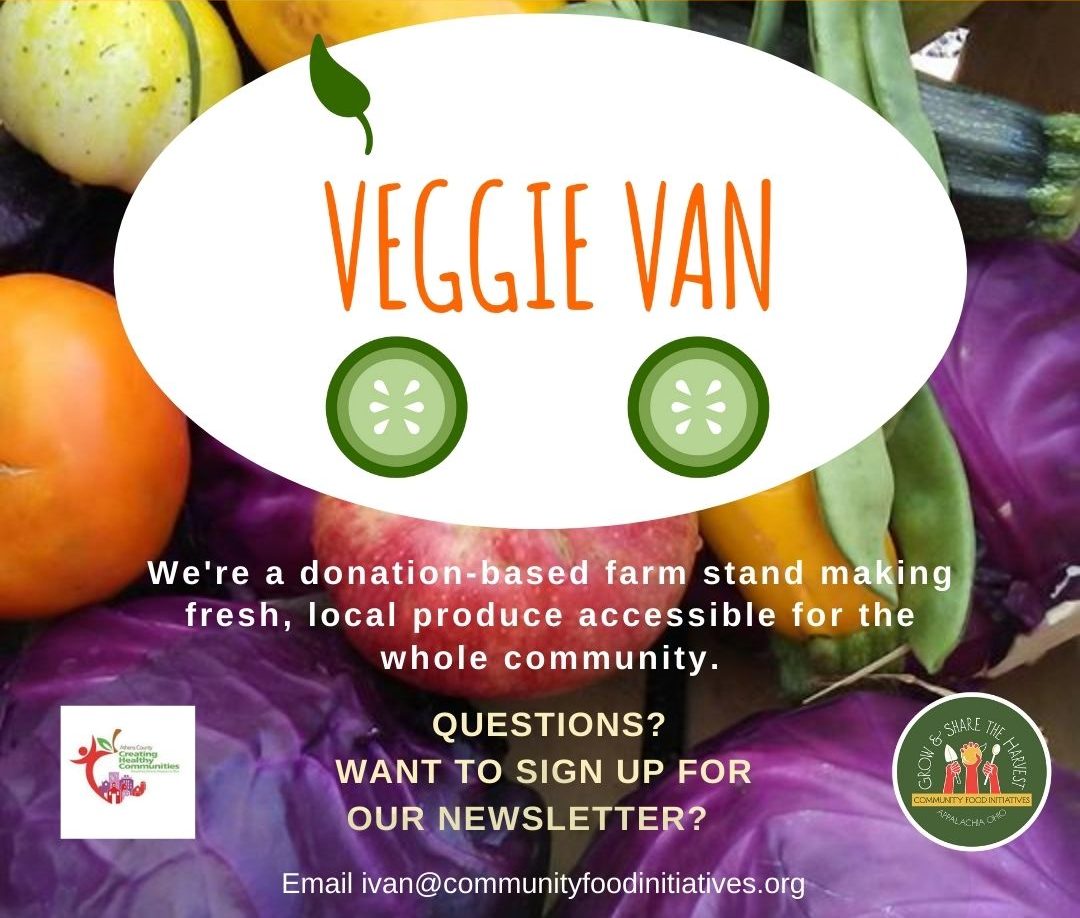 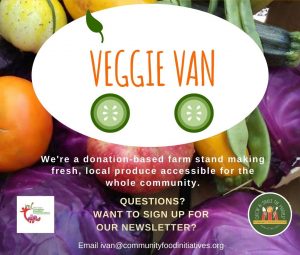 If you have ever been to the Chesterhill Produce Auction or live in Glouster, Nelsonville or Coolville, you may have seen a large van emblazoned with gorgeous photos of vegetables. It’s the Veggie Van, a project of Community Food Initiatives, the Appalachian Center for Economic Networks (ACEnet) and Rural Action.

The Veggie Van is a mobile farm stand: stocked with fresh, local produce that is transported to rural communities with extremely limited access to grocery stores or farmers markets. The produce is then offered in exchange for a voluntary donation. The donation-based model, combined with the van’s mobility, ensures that healthy food is accessible both geographically and economically.

“We are a donation based market, so we have suggested donations for our produce, but people are welcome to donate more, less, or take stuff home free,” said Ivan Orquera, CFI’s Veggie Van coordinator. “Whatever is best!”

Orquera uses the donations to purchase fresh produce from local farmers. Most is bought from Rural Action’s Chesterhill Produce Auction, where he can buy bulk quantities at a relatively low price. In this way, the Veggie Van not only supports communities with low access to fresh food, but it also builds the local economy by purchasing from local producers.

The Veggie Van often ends up earning more money than it spends on produce, Orquera said — but the excess donations go toward future food purchases. Produce left over at the end of market days is given to CFI’s Donation Station for local food pantries and distributors. After the Coolville market, Orquera often takes extra produce right across the street to the Coolville Public Library, one of the Donation Station’s distribution partners.

The Veggie Van first appeared in southeast Ohio in 2020 with one market location in Glouster. That year, the program distributed over 3,800 pounds of fresh produce to 382 people. This year it expanded to include Nelsonville and Coolville as well, and partnered with the Chesterhill Produce Auction buying club and Rural Action’s produce prescriptions program to distribute bags of produce to over 400 additional customers. 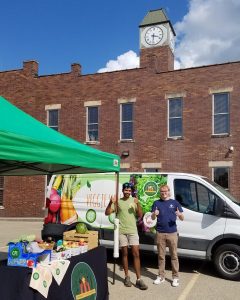 The Veggie Van idea began with a University of Buffalo study of access to fruits and vegetables. The study focuses on communities with low access to fresh produce, either geographically because they are not located near a supermarket, or economically because they cannot afford to purchase it. Many areas of southeast Ohio fall into one or both of these categories.

Areas without grocery stores or markets are often referred to as “food deserts,” although the term “food apartheid” is also used to reflect the impact of government policies on food access.

The University of Buffalo started the Veggie Van program to evaluate one potential solution to the issue of food access that addresses both geographic accessibility and affordability: a mobile market that travels to underserved communities with reduced-price fruits and vegetables. Athens County is one of eight test sites across the country to participate in the study, with CFI implementing its mobile market and reporting outcomes to the University of Buffalo.

CFI Communications and Donation Station Program Director Susie Huser said the decision to pilot the Veggie Van was based on community surveys that showed transportation as a major barrier to healthy food access in the region. The survey was conducted by Kari Boyle, coordinator of the Creating Healthy Communities program at the Athens City-County Health Department.

CFI was initially hesitant to take on the Veggie Van project, Huser said.

“CFI staff and board were pretty uncertain about having the capacity to take it on,” she said. “We decided to move forward based on a goal to make it a collaborative project, knowing that networking is a strength of CFI and among food access organizations here, and knowing that we have a lot of partners who could contribute the expertise and resources necessary to make the project successful.” 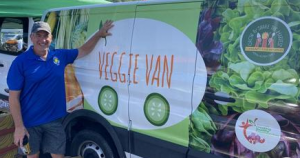 Leslie Schaller, director of programs at ACEnet, attributes the project’s success to the strong ties between the partnering agencies. The collaborative relationships between CFI, Rural Action and ACEnet, along with the Creating Health Communities Coalition, Chesterhill Produce Auction, CFI’s many community partners, have been integral to the initiative, she said.

“When customers go to the Veggie Van, they see one piece of the puzzle to conquer food insecurity,” said Schaller. “Each of the partners of the Appalachian Accessible Food Network brings their indispensable piece to complete the picture. Food production, collection, distribution, storage, processing — one organization can’t do it all, but the strength of the network ensures that each of our contributions are connected and supported.”