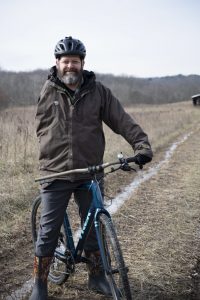 Charles Scott McDonald has been riding bikes, in one form or another, since he was a little kid. A long-time resident of Morgan County, the routes McDonald took were often on rural, unpaved roads. “I rode my bike everywhere. Both my parents worked, so they were out of the house. If I wanted to go do something, I just jumped on a bike,” he said.

As a teenager, he rode BMX (bicycle motocross), but said there weren’t any competitions close by which always required him to travel for races. Now a certified coach, he competes in a variety of cycling events around the state and country, including intense 24-hour races, cyclocross and gravel races.

In an interview in 2018 with Bicycling Magazine, McDonald talked about what sparked his competitive cycling career, after a train accident caused him to lose his right arm in the late 1990’s. “The doctors put me on narcotics and I gained a lot of weight. I’d always been fit—I once was a runner—and I needed something physical to do for exercise. Some friends were into bikes, so I gave it a shot. Phantom-limb pain causes me a lot of discomfort, and the first thing I noticed on the bike was just how much better I felt,” he said.

McDonald is particularly interested in gravel riding these days, which is pretty much what it sounds like– “mixed surface” cycling that combines elements of road and mountain-biking, and takes place mostly on unpaved roads. Though people have been riding on gravel roads for decades, it is the fastest growing sector, according to a 2018 Outside Magazine article. McDonald participates in an annual gravel race in Emporia, Kansas, called UNBOUND Gravel that now draws over 4,000 riders, but started in 2006 with only 35 participants.

With its proximity to the Baileys Trail System to the south in Athens County, the AEP Recreation Land to the north in Noble County and the Wayne National Forest surrounding the region, Morgan county is uniquely positioned to serve as a similar outdoor recreation hub.

“I think that the county has always been this hidden outdoor oasis,” McDonald said.

He’s launched a business called Morgan County Adventure Cycling and plans to lead private coaching sessions and guided tours from his family’s property in Ringgold. “We’ve always come here and trained because Morgan County has over a hundred miles of gravel roads. There’s plenty of options to do 20 to 30 plus mile loops without ever crossing a paved road. On our property alone, we’re surrounded by seven miles of gravel road; there’s over 800 feet of elevation change within that seven miles. We have a 24 mile loop out here that has over a thousand feet of elevation gain,” he said. 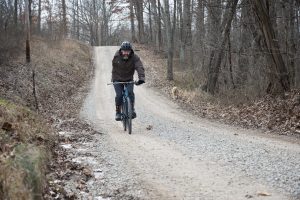 Though he’s been training here for years, McDonald says Morgan County is currently under-utilized by other cyclists. The Ohio Gravel Race Series, which holds 7 unique gravel road races, gets close to Morgan County with a race in Athens, but McDonald thinks Morgan County would be another prime locale to hold competitions. “We actually have a fairgrounds in McConnelsville, which is tied into the center of all of our gravel roads and event centers. We wouldn’t even actually have to add in any infrastructure and we could host a lot of phenomenal events,” he said.

He’s recently completed the Trail Town Business Challenge (TTBC), a five-part workshop series focused on business planning training. Funded by the Appalachian Regional Commission (ARC) through a Partnerships for Opportunity and Workforce and Economic Revitalization (POWER) grant and led by ACEnet & Rural Action, McDonald says the challenge has helped him learn about ways to legally connect long routes in the area through property easements, a legal situation in which the title to a specific piece land remains with the landowner, but another person or organization is given the right to use that land for a distinct purpose. 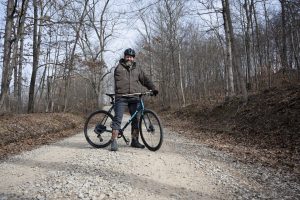 “Many folks don’t realize that the majority of land in Ohio is privately owned. I learned about the opportunity to work with landowners through easements, so we can have access to their land and then they don’t have to fret about liability and things like that. Because if you connect a few of the landowners with the gravel roads around here, we can have 200 mile loops,” he said.

He continued, “Cycling’s been around for a while. So there’s a lot of information out there about the economic impact. There’s a lot of interest in this kind of development– outdoor recreation offers huge economic opportunities. But plus we get to preserve the land. So you’re in Morgan County where we’re famous for the biggest destructive tool on the planet. Historically, we’ve ripped holes in the ground for progress here. You know, guess what? That’s over.”

With the recent surge in interest in cycling as a whole, due in part to the COVID-19 pandemic, combined with the potential economic and positive environmental impact, and the geographic location, McDonald thinks he has a winning combination. “We’re a short drive from Columbus. It’s a short drive from Zanesville. It’s not too far from Cincinnati. We’re really interested in being a conduit. One of the things missing in the area is folks with knowledge and experience of the cycling industry. I feel that we at Morgan County Adventure Cycling can be a strong advocate and provide resources for education around cycling. The neat thing about this area is there’s something for everybody to do,” he said.

For more information about Morgan County Adventure Cycling or the TTBC email Charles Scott McDonald or click below: